Füllkrug: “Credit to the younger lads”

Goalscorer Niclas Füllkrug paid credit to the squad after a disturbing and eventful day at SVW. “I expected the older lads to be able to deal with what happened today,” said the attacker, but he was surprised by the reaction and conduct of the younger players to the news that Markus Anfang was to step down as Werder head coach following his impending investigation. “The way that put the events of the last few days behind them wasn’t easy,” added Füllkrug, who scored a late equaliser to rescue a point for Werder Bremen against FC Schalke 04 (1-1). 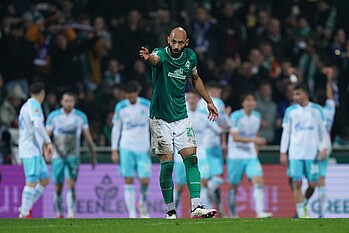 Niclas Füllkrug: “Credit to the entire team, the staff and also the younger lads for the way they didn’t let the events of the last few days affect them, it’s certainly not easy to do something like that. We basically dominated the entire game, and Schalke never had any real spells in which they were on top. On multiple occasions we got a lot of men forward in attack, we could have taken some of our chances better and scored a goal much earlier than we eventually did. But after a difficult day for the club it was good that we got the equaliser.”

Danijel Zenkovic: “We knew it would be a complicated and tight game which wouldn’t be flooded with goals, because Schalke work hard to defend their goal, they are physically strong, good from set-pieces and are a defensive side overall. We knew it could go right down to the wire.”

On Werder’s current position in the league table:

Christian Groß: “Our last few results have proven that we’re going in the right direction. There are just a few games left until the break and we’re going to try and get as many points before then.” 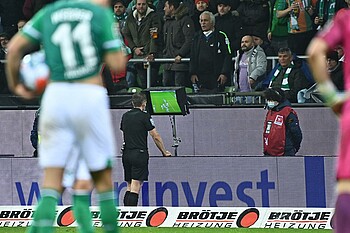 Tobias Stieler awarded a penalty to Werder shortly before the end (photo: nordphoto).

Niclas Füllkrug: “I wouldn’t have got this far in my career by backing away from moments like these. I was looking forward to taking the penalty. You try and play football at the highest level possible, and these are moments which develop you as a player. It’s one of the thrills of the game.”

Danijel Zenkovic: “That’s what VAR is there for. It makes those important decisions and so I don’t think there’s anything more to say about the incident. What’s the point of VAR, if we are going to further debate its decisions?”

Christian Groß: “We took it all in and said “Tonight is about the three points, it’s about SV Werder Bremen. I’d like to pay a huge credit to the team and how they fought today.”

Niclas Füllkrug: “That was a real shock, simply put. We we’re surprised by the initial allegations and it really got to us. We were on good form, going unbeaten in our last three games. It’s such a shame it had to be like this. If the accusations prove to be correct, then that will be a huge disappointment on a personal level. We worked really hard over the last few months and spent a lot of time together.”

Danijel Zenkovic: “I prefer to concentrate on the things we can control, like the players, our tactics, our analysis. I’m really exhausted from the emotional game we just played and am looking forward to getting a good night’s sleep.”