Romano Schmid on a long wait for his first goal, shooting from distance and Bundesliga 2

Things could hardly be going better for Romano Schmid under head coach Ole Werner. In his last five games, the Austrian U21 international has scored three times, each one from outside the box. “I always stuck at it and kept working hard,” said the SVW midfielder, who had waited 41 matches for his first goal. In Tuesday’s Mixed Zone, Schmid spoke about playing with Leonardo Bittencourt, how difficult the second division is and his shooting technique.

...his current form: “Of course I would really like to keep it going. But I have also had periods when things haven’t been going so well, and I stuck at it and kept working hard. I think the crucial factor is that I am now playing centrally. At the start of the season, I was often played out-wide. When I’m playing in the middle then I get into positions where I can shoot. For me, however, it’s much more important that the team keeps performing and we win together.” 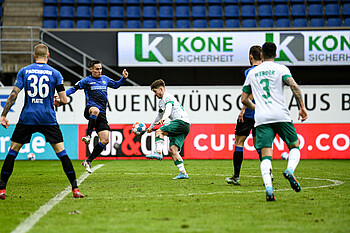 [Translate to Englisch:] Romano Schmid scored to get Werder back in the game at Paderborn (Photo: WERDER.DE).

...his special technique from outside the eighteen-yard box: “I have scored a few goals from outside the box for the national team. It’s even better that I can show that here now as well. I practise shooting from distance pretty much every day and so I have developed a consistent motion. I am really thankful that I can train with Patrick Kohlmann. He encourages me to have confidence and tells me that I should take risks.”

...playing with Leonardo Bittencourt: “Leo has always given me tips as he has a lot of experience. When I scored my first goal in the game against Aue, I ran straight to Leo and celebrated with him. He has always said that I should stay positive and eventually the rewards will come. I’m really grateful that he helped me and always gave me confidence in myself.”

...his long goal drought: “It’s obviously not nice to be in a position where you haven’t scored in such a long time. I actually did score twice in the Bundesliga, but both goals were ruled out. At the start of the season it was still not coming together, but that makes me even happier that things are going better now. Long may it continue.”

...the second division: “Bundesliga 2 is harder for me compared to the first division, because it’s much more physical and you get a lot more one-on-one situations. You get targeted a bit more as a smaller more technical player in this league, but you can see I am still able to play my game.”

Marco Friedl earns a recall to the Austria squad

Clemens Fritz to stay at Werder

"We showed that hard work pays off"

18.05.2022 / First Team
Your web browser ist outdated.
The web browser you are using is no longer supported.
Please download one of these free and up to date browsers.
Why should I use an up to date web browser?