SVW get their fifth league win in a row

Werder completed a miraculous comeback to win 4-3 against SC Paderborn and secure their fifth consecutive league victory. The Green-Whites did not lose hope after SCP’s were allowed to retake their penalty, two SVW goals were disallowed and they went 3-1 down just before the hour mark. Captain Ömer Toprak scored the much-celebrated winner (86’) late on following goals from Marvin Ducksch (35’), Romano Schmid (59’) and Niclas Füllkrug (66’). Paderborn’s goals came courtesy of Florent Muslija (15’ and 38’) and Felix Platte (57’).

Line-up and team news: Head coach Ole Werner made a change to his starting line-up for the first time since he took charge at Werder. Due to his ongoing knee problems, Felix Agu was unable to travel to Paderborn, and Jean-Manuel Mbom took his place in the starting XI at right wing-back. 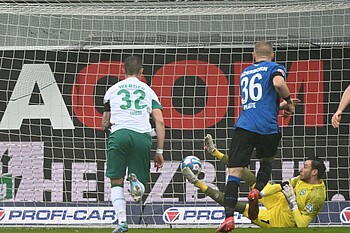 12: Penalty to Paderborn: Klement’s free-kick effort hits the wall, and Toprak and Michel attempt to get on the ball in the penalty area. Toprak makes contact with Michel during his clearance, and referee Tobias Welz points to the spot.

15’: GOAL, 1-0 to Paderborn, Florent Muslija. The hosts take the lead after Muslija sends Pavelnka the wrong way and slots his penalty into the bottom-left corner. It’s tough to take for Pavlenka, who had initially saved Michel’s penalty, but Friedl encroached into the area too soon before making the clearance, and the new taker made no mistake.

21’: The ball is in the back of Paderborn’s net, but Marvin Ducksch’s equaliser is disallowed after a VAR check. Following a misplaced pass from SCP keeper Huth, Schmid played it through to Niclas Füllkrug who then moved it on to Ducksch, but Werder’s number 11 was offside when he received the pass from Schmid, and so the decision was no goal.

35’: GOOOAL, 1-1, Marvin Ducksch. Bittencourt’s pokes it through and sends Ducksch on his way. He enters the penalty area, weaves past two SCP defenders and wrong foots goalkeeper Huth to score at the near post.

38’: GOAL, 2-1 to Paderborn, Florent Muslija. Paderborn retake the leads thanks to a brilliant effort from Florent Muslija. The SCP player shoots from the left side of the penalty box and curls the ball into the top left corner. Veljkovic allowed his opponent too much room, and Pavlenka, who had just kept out Michel with a brilliant stop, could do nothing about this one. 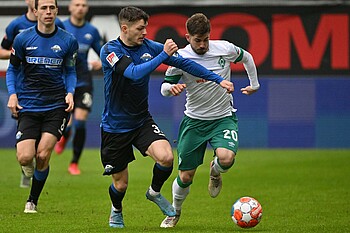 Romano Schmid and Paderborn's Florent Muslija (L) played their part in what was a crazy match (photo: Nordphoto).

54’: The first real chance of the second half falls to the hosts – Platte shoots from the right-hand side of the penalty box towards the far post, but Pavlenka makes a strong save.

57: GOAL, 3-1 to Paderborn, Felix Platte. The SCP striker gets the better of Pavlenka on this occasion with an outstanding effort from just in front of the halfway line. He catches the SVW keeper by surprise and extends Paderborn’s lead.

59’: GOOOAL, Romano Schmid, 2-3. Werder respond quickly! And this one’s also a worldie! Paderborn’s clearance from the corner only gets as far as Romano Schmid on the edge of the box, who chests it down before slamming the ball home into the top left corner.

66’: GOOOOOOAL, 3-3, Niclas Füllkrug. Füllkrug’s done it! He gets on the end of Platte’s misplaced pass and makes a strong run towards Paderborn’s goal before slotting it home from twenty yards.

70’: Paderborn celebrate a magnificent Platte long shot as they believe they’ve taken a 4-3 lead, but moments before the goal he fouled Toprak, and so referee Welz disallowed the goal.

73’: What is going on here? Marvin Ducksch perfectly curls the ball into the top-right corner from the edge of the penalty box, but Werder’s goal also will not stand. Füllkrug, who provided the assist for Ducksch, was onside when the ball was played to him.

82’: Ducksch has a go from the right side of the penalty box and shoots at a tight angle towards the near post. His shot hits the outside of the post! So close!

84’: Pavlenka to the rescue again for SVW! He saves the first Paderborn attempt from Cuni and then the rebound from Pröger with a reflex save to keep the scores level.

86’: GOOOOOOOOOOOOOAL, 4-3 to Werder, Ömer Toprak. SCP keeper Huth misjudges the flight of Marvin Ducksch’s corner, but captain Ömer Toprak is alert and bundles the ball over the line. Bremen take the lead for the first time this afternoon!

Summary: A muddy, sodden pitch and two teams who wanted to attack are the base ingredients of a classic Bundesliga 2 encounter. The game began at a franatic pace, there were a lot of hard challenges, plenty of action in the penalty box, several VAR checks, three disallowed goals, both sides hitting the woodwork and a few wondergoals. Werder didn't give in at 3-1, showed great fighting spirit and had a little bit of luck on their side when it mattered at the end.

Marco Friedl earns a recall to the Austria squad

Clemens Fritz to stay at Werder

"We showed that hard work pays off"

18.05.2022 / First Team
Your web browser ist outdated.
The web browser you are using is no longer supported.
Please download one of these free and up to date browsers.
Why should I use an up to date web browser?