Showing our steel – until the end!

Preview of our game against Schalke 04

When the referee blows his whistle to get SV Werder Bremen’s game against FC Schalke 04 at the wohninvest WESERSTADION on Saturday night underway, every football fan in Germany will be watching. Following 104 meetings in the Bundesliga, the two traditional heavyweights will meet for the first time in the second tier this weekend. Even if the “Royal Blues” sit higher in the table than SVW, the Green-Whites can’t hide away, emphasised head coach Markus Anfang. “We ran 120km as a team against Nürnberg, which showed we can more than hold our own in intense games. That’s the basis, and the positive emotions we got from our last game can help us,” said Anfang, speaking in his press conference on Thursday.

Squad news: Nicolai Rapp and Marco Friedl are both suspended following their yellow cards against Nürnberg. Central defender Milos Veljkovic sustained a muscle injury on international duty, and he will also be out. The experienced Christian Groß and Ömer Toprak have taken part in several full training sessions and made cameos against Nürnberg so could be candidates for the starting XI, depending on how they recover from the workload over the week’s training.

The head coach on the game: “Schalke were able to start preparing for life in the 2. Bundesliga very early and made some extremely effective signings. Their team will not perform any differently as a result of them not playing too well in their last games. They haven’t lost the quality in their squad from two defeats,” said Anfang in his press conference on Thursday. 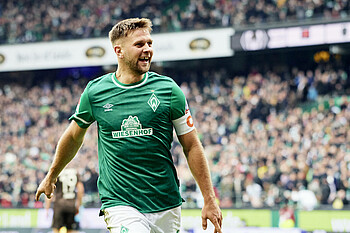 Our last meeting: The fixture is one of the most-played in German football – Saturday’s game will be the 110th time Werder and Schalke have met in professional competition. Our Green-Whites have won more games against the “Royal Blues” than against any other opponent, winning 47. The last meeting between the two saw the points shared in Bremen; a 38th-minute opener from Omar Mascarell saw the away side lead, until Kevin Möhwald equalised 13 minutes from time to earn a deserved draw.

Holding our nerve will be important: Werder and Schalke have had several games decided in the closing stages, with both sides scoring five goals after the 80th minute so far this season, the joint-most in the league. Of course, preventing goals in the final stages of games is just as important as scoring them at the other end, and this is an aspect which Schalke need to improve on. Dimitrios Grammozis’ side conceded their seventh goal in the final 15 minutes of games against Darmstadt last time out. No other team has conceded more late goals than Schalke.

Story of the table: Schalke 04 sit three points and three places higher than Werder. With a win, SVW will go level with their opponents and get back into the race for promotion. The “Royal Blues” can climb to second in the table with an away win.

Compiled by WERDER.DE and Opta.